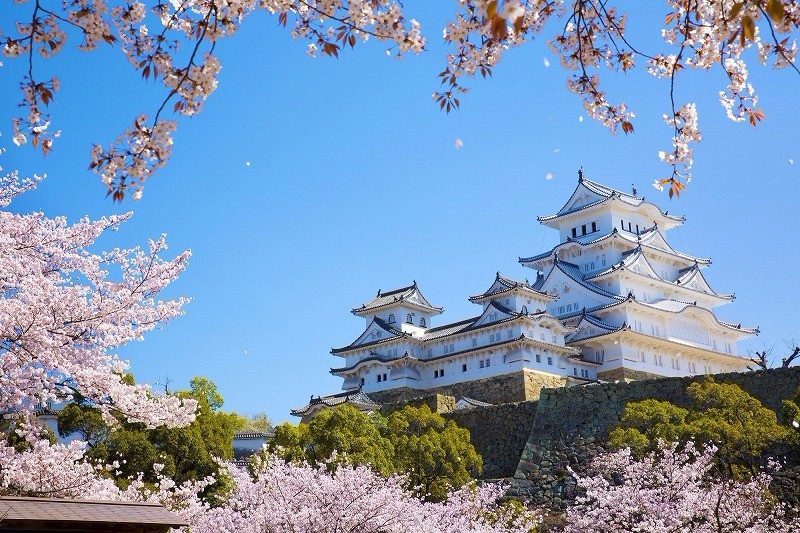 Contents hide
1 World Heritage Site, Himeji Castle
2 Castles were created during the rush to build castles
3 Why Ieyasu invested his wealth and manpower
4 Thought of as a castle of warlessness
5 What to see at Himeji Castle
6 The egret keep is the undisputed top attraction
7 Let’s take a look at the fate of the princesses
8 Okiku Well in Banshu Sarayashiki
9 A famous place for cherry blossoms in the spring
10 Is Himeji Castle a giant maze?
11 Photography spots
12 The “Ten Views of Himeji Castle” decided by citizens
13 The Shiromidai, installed at the station, is recommended
14 Let’s visit Himeji Castle
15 Himeji Castle Access
16 How to avoid the crowds?
17 Himeji Castle
18 Specialties of Himeji Castle

For example, just as there are different types of cuisine and likes and dislikes when asked to recommend a good restaurant, it is sometimes impossible to recommend a restaurant that is good for everyone, so when a castle enthusiast is asked, “What castle do you recommend? it is difficult to answer “I can definitely recommend this castle”. In such a case, I would like you to go to a castle that is “worth visiting once”. Today, many people often think of Himeji Castle when they think of “Japanese castles”. This is because Himeji Castle represents Japan in both name and reality.

The castle was built on Himeyama, isolated in the Harima Plain, and was registered as a UNESCO World Heritage site in 1993, and is representative of the 12 existing castle towers in Japan. Eight of the castle’s buildings are designated as national treasures and 74 as important cultural properties, and it reigns as one of Japan’s most beautiful castles in both name and reality, including one of the 100 best castles in Japan and three of the best castles in Japan. It is also famous for being called “Shirasagi-jo” (White Egret Castle) because of the beautiful white castle tower.

Castles were created during the rush to build castles

It is said that Himeji Castle was first built in 1346 by Sadanori Akamatsu. After that, the Kuroda and Hashiba clans took over the castle and it was developed as a strategic point for transportation. After the Battle of Sekigahara, Ikeda Terumasa completed the castle into a large one like the present Himeji Castle.

The decree to abolish the castle led to the demolition of many buildings and the stationing of the former army, but thanks to the efforts of military leaders and others, the castle keepers and some of the turrets were preserved, and it was decided to preserve them at government expense.

Why Ieyasu invested his wealth and manpower

A castle is a military base, and there is a reason why Himeji Castle has become so beautiful. If the castle was only a military base, there would be no need to make it look beautiful on the outside, but this was a psychological strategy of Ieyasu the Great, who gave the castle an important role as a symbol of authority, showing off its strength and power.

Thought of as a castle of warlessness

While castles around Japan were damaged one after another during the Pacific War, Himeji Castle was one of those that suffered from air raids as well, and there is an anecdote that it was lucky that the incendiary bombs that were dropped on the top floor of the castle tower on two separate occasions were unexploded and the castle escaped being burned down. Most of the castle was inherited from the Edo period, but many of the existing buildings have been renovated and cared for, and a park has been developed around the castle ruins, making it a place for citizens to relax. The castle is often used as a stage for period dramas, and many people are unaware of the appearance of Himeji Castle.

What to see at Himeji Castle 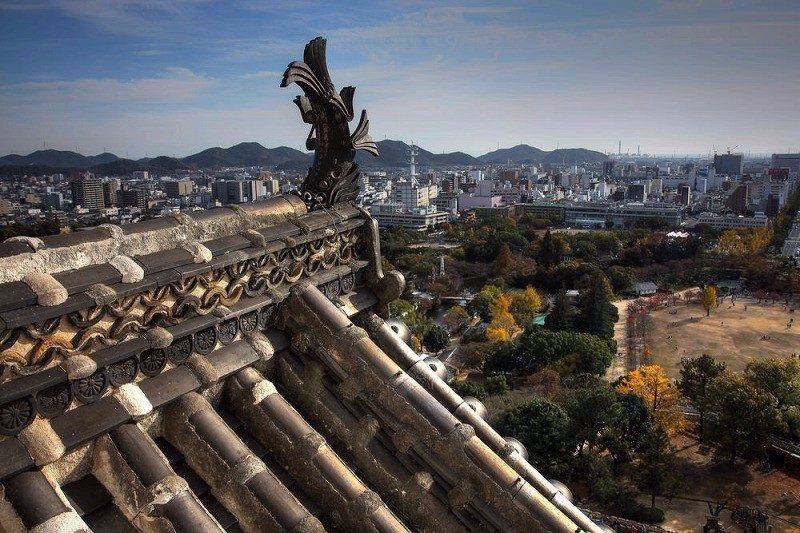 The egret keep is the undisputed top attraction

Himeji Castle is also known as “Shirasagi-jo” (White Egret Castle) because its shape is reminiscent of an egret that has flown down from the sky. Japanese castles are divided into two types: white castles, such as Himeji Castle, and black castles, such as Kumamoto Castle. Himeji Castle is representative of the white form, and it can be said to be an expression of Ieyasu’s insistence on showing off his power. The view from the main keep is also wonderful, and the view from a height of about 30 meters is highly recommended. 3 small towers are connected to the main keep by crossing towers, and it is fun to compare the view of the city of Himeji from each of the small towers.

The West Small Keep is the counterpart to the East Small Keep and is the same in construction. It is also the last place to be defended when the enemy arrives at the main keep.

Let’s take a look at the fate of the princesses

Himeji Castle also happens to be the place where the fates of the “princesses” played out. The Princess Satoruhime, the wife of Ikeda Terumasa, lost her husband and young child to illness, so it can never be said that she had a happy life after death. Since the space where the princesses spent their time can be seen in the Nishinomaru, it is worth paying attention to the princesses who lived through the turbulent times.

There is an old well called “Okiku Well” in the plaza called “Sanjo-Sato”, which used to be called Tsuribetori Well. About 450 years ago, Danjo, who was accused of hiding one of his family’s heirloom plates, cut Okiku to death and threw her into this well. It is famous as Banshu Sarayashiki for the ghost story that a woman’s voice can be heard counting the plates at night, saying “One or two…”.

There are many people who know of Okiku’s ghost story but do not know that it is located at Himeji Castle. There are different versions of the ghost story depending on who tells it. It might be fun to compare them with the stories you know.

A famous place for cherry blossoms in the spring

In spring, Himeji Castle is surrounded by cherry blossoms in full bloom, and even the white keep seems to be tinted pink. The sight of some 1,000 cherry trees, including someiyoshino and weeping cherry, in full bloom is breathtaking. 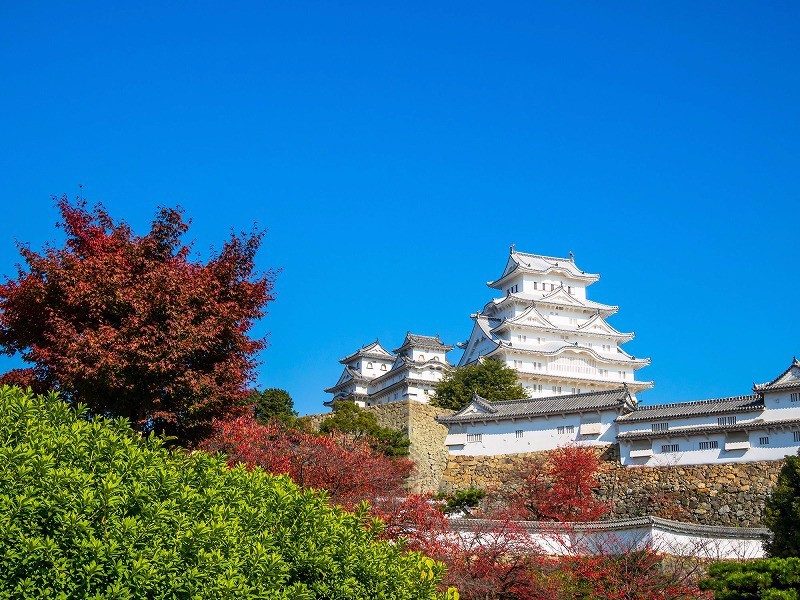 Is Himeji Castle a giant maze?

The precincts of Himeji Castle are characterized by complex passageways that look like a maze. This can be said to be one of Ieyasu’s particular features, as he considered not only the beauty of the castle, but also its importance as a military base. If you walk through the traps, which were designed with the thoroughness of warfare in mind, you will feel as if you were an enemy soldier. Since it’s Himeji Castle, it might be fun to walk around while paying attention to the layout and direction of the gates as well as the keep.

The “Ten Views of Himeji Castle” decided by citizens

Himeji Castle is a World Heritage Site. If you visit the castle, you will want to take pictures of it from various angles. The “Ten Views of Himeji Castle” were selected by the citizens of Himeji. The Otemae Street, San-no-maru Square and Jomidai Park were chosen by the locals, so there are plenty of places to see. Otemae-dori Street is a superb view spot from the Shiromi Tower just outside the concourse in front of JR Himeji Station. The view from the Otemae-dori is suitable as the gateway to Himeji, and the white castle towering in front of the Otemon Gate makes you want to point your camera at it.

The Shiromidai, installed at the station, is recommended

The view of Himeji Castle from Otemae-dori is a little far from the main keep, so a telephoto lens would be nice. The view from Jomidai is a popular spot as it offers an unobstructed view of the beautiful castle from the front without being blocked by cars or buses.

There is an elevator that allows wheelchairs and strollers to view the castle, so anyone can easily enjoy the view. 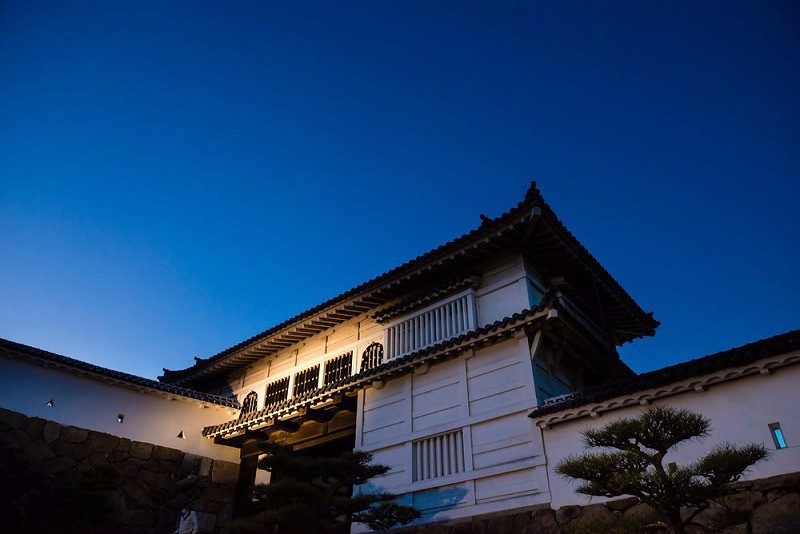 The best way to get to Himeji Castle is by train. As soon as you exit the North Exit of Himeji Station, you will see the main keep, and if you walk straight ahead, you will arrive at Himeji Castle, which is very simple and easy to understand. However, even though you can see the castle, it is about 1.3 kilometers away and it takes 20 to 30 minutes to walk there, so you should allow plenty of time.

There is a “loop bus” from Himeji Station that circles around the castle and is characterized by its retro appearance. The bus runs twice an hour, and a free pass is available for 500 yen.

How to avoid the crowds?

Crowding is a concern when it comes to World Heritage sites. It is inevitable that there are many people throughout the year, but you can avoid the crowds on weekdays comparatively. On weekends and consecutive holidays, crowds are a must. During the cherry blossom season and school holidays, it will be crowded even on weekdays, so be prepared to go.

Although it gets a bit cold, weekdays in November and December are recommended because you can avoid the crowds comparatively.

The “Himeji Oden” is a must-try when visiting Himeji Castle. It is no different from the most common oden, but the characteristic of Himeji oden is that it is dipped in ginger soy sauce. It is available at restaurants and izakayas (Japanese style pubs), so be sure to try it.