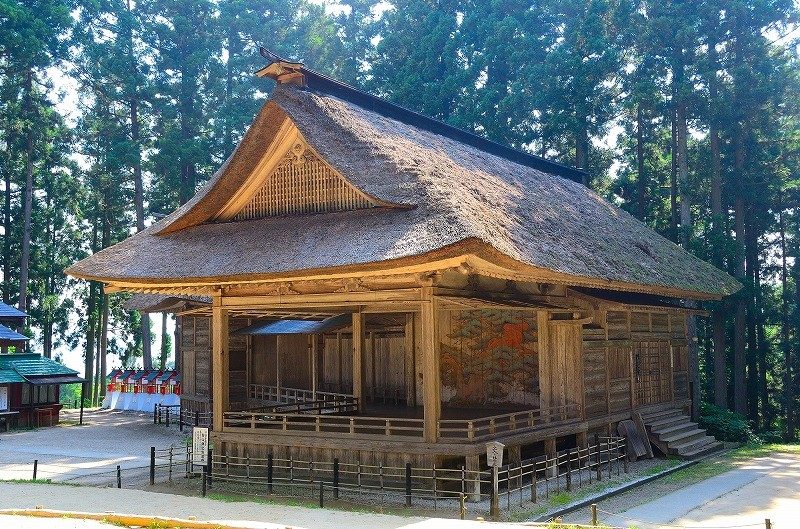 Contents hide
1 Chuson-ji Temple, a treasure house of Heian art
2 Hiraizumi World Heritage Site
3 Motsu-ji, a Japanese garden where the Pure Land world unfolds
4 The legend of Yoshitsune’s northward journey
5 Kinjisan, the mountain that set the standard for Hiraizumi’s town planning
6 The mountain has a proud 1200-year history.
7 The Bishamondō Hall of the Tatsuyakutsu Cave boasts 1,200 years of history
8 Three must-see places in Hiraizumi
9 Chuson-ji Konjikido
10 Hiraizumi Golden Cockscomb Mountains
11 Land of Yoshitsune’s death
12 This is the place to go if you want to take pictures!
13 Photography spots
14 How to enjoy photography
15 Hiraizumi Access
16 Gourmet and shopping information
17 Hiraizumi Access
18 Advice on access

Hiraizumi is home to a diverse group of temples, gardens and ruins based on the Pure Land philosophy of Buddhism. There are many ruins and temples from the period when the Oshu Fujiwara clan ruled the area around the center of present-day Hiraizumi. Fujiwara no Kiyohira, the first Fujiwara lord, built Chuson-ji Konjikido, and it is said that Hiraizumi was second only to Kyoto in terms of the scale of its ruins.

Chuson-ji was founded in Kasho 3 by Jikaku Daishi Ennin, a high priest of Enryaku-ji Temple on Mount Hiei, and later Kiyohira of Oshu Fujiwara built a large hall and pagoda. The purpose of Chuson-ji was to comfort the souls of those who had died in the wars that raged in the Tohoku region in the latter half of the 11th century, regardless of friend or foe, and to build a Buddhist land (an ideal peaceful society based on the teachings of Buddha) in the Tohoku region, which had been called ‘Michinoku’ and was considered a frontier. It was also Kiyohira’s determination not to fight, as he had lost his father, wife, and children in the war and was forced to fight with his own flesh and blood. Konjikidō, which still retains its original appearance, was completed in 1124. The Amida Hall, which is “all gold” with gold leaf inside and out, is a sight to behold.

Minamoto no Yoshitsune was a young boy.

It is also known as the place where Minamoto no Yoshitsune was protected by Fujiwara no Hidehira as a child, and when he was chased by his elder brother Yoritomo, he relied on the Fujiwara clan and went to Oshu, where he lost his life.

Hiraizumi was registered as a World Heritage Site in June 2011, three months before the Great East Japan Earthquake and Tsunami struck Iwate Prefecture. This was a source of great joy, courage and hope to the people of Iwate Prefecture, who had been devastated by the disaster.

The Iwate Prefecture was originally founded in the 12th century in the Hiraizumi area.

Hiraizumi was originally the site of a major war in the 12th century. The city of Hiraizumi, which was built in the hope of lasting peace, has found hope for restoration with its registration as a World Heritage site. 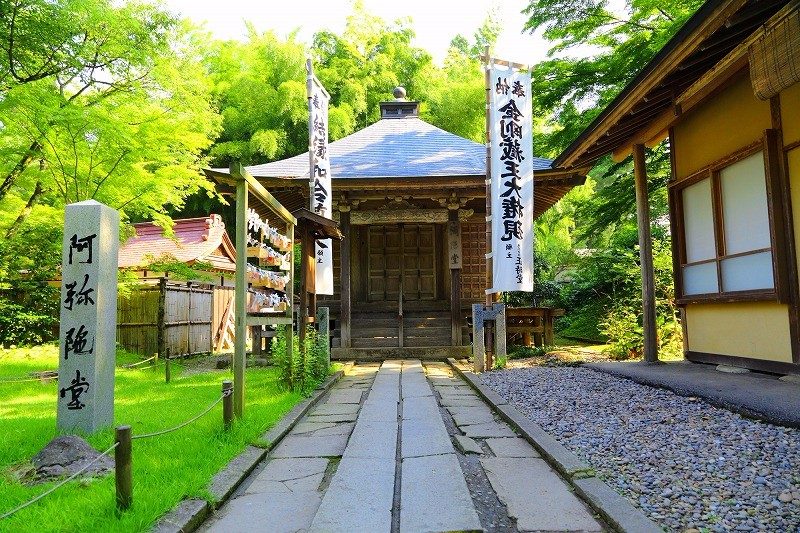 Motsu-ji, a Japanese garden where the Pure Land world unfolds

Motsuji Temple was founded by Ennin, the Great Monk Jikaku, and many buildings were constructed during the reigns of Motohira, the second Fujiwara lord, and Hidehira, the third. It is said to have surpassed Chuson-ji in size and splendor, with 40 pagodas and 500 monks’ quarters. The Pure Land Garden is said to represent the world of Buddha (the Pure Land) on earth. The Oizumigaike Pond is filled with pure water, and around it, there is a beach, a water divider in the style of rough seashore, standing stones for turning back waves, Hashibikiishi, which forms the base of a bridge, a hill in the style of dry landscape garden, and a garden of reverie. The garden is still as beautiful today as it was 800 years ago, with the trees surrounding the garden.

The legend of Yoshitsune’s northward journey

It is not until five years after Yoshitsune’s death that he appears on the stage of history.

Was Genghis Khan Yoshitsune? The mystery of history is still unsolved. 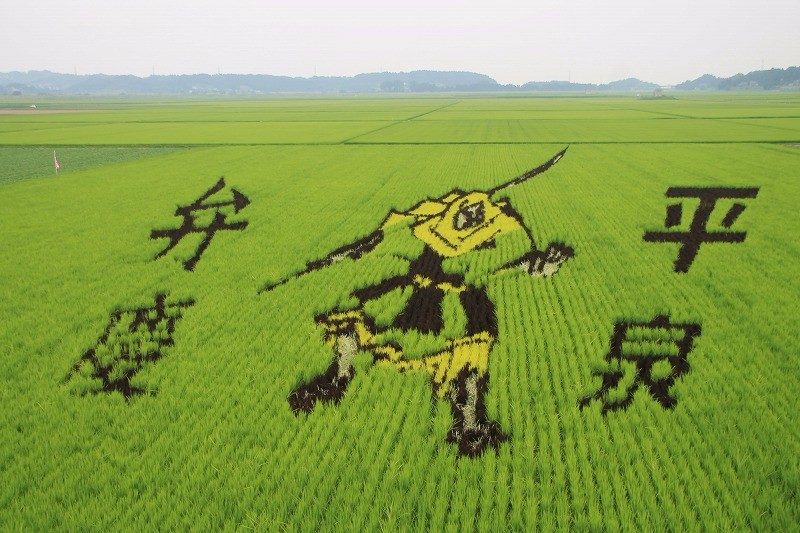 Kinjisan, the mountain that set the standard for Hiraizumi’s town planning

Kinkeisan is a cone-shaped mountain situated about halfway between Chuson-ji and Motsu-ji. There is a sutra mound at the top, and legends say that a golden chicken was buried there to protect Hiraizumi, and that the mountain was built in one night with laborers lined up all the way to the Kitakami River. Basho Matsuo wrote in his Okunohosomichi (The Narrow Road to the Deep North) that “Hidehira’s tracks have become a field, and only Mt.

The mountain has a proud 1200-year history.

The Bishamondō Hall of the Tatsuyakutsu Cave boasts 1,200 years of history

Tatsuya Cave is a rock cave where Sakagami Tamuramaro enshrined Bishamonten (the god of war) to commemorate his conquest of the barbarians. The Bishamondō Hall, built on a cliff, has been rebuilt after each fire. Don’t miss the statue of Joroku Fudo Myoo, created in the Heian period (794-1185), and the Iwamen Daibutsu (Great Buddha with rock face), which is said to be the northernmost statue of the Buddha. The entire precincts of the temple are designated as a historic site.

Chuson-ji is one of the buildings in Hiraizumi that make up the World Heritage List. Chuson-ji has Konjikido, a covered hall and the Sutra Repository, of which Konjikido is the most famous. Konjikido is the Amida Hall and was built by Fujiwara no Kiyohira. The entire hall is richly decorated with gold leaf, and the bodies of Fujiwara no Kiyohira, Motohira and Hidehira, as well as the mummified head of Yasuhira, are enshrined inside the altar. The four men who ruled Hiraizumi still rest here today. 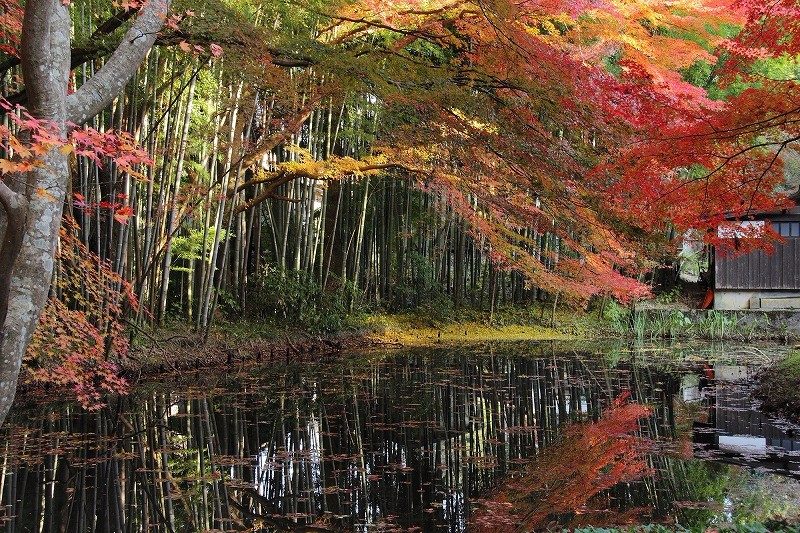 Kinkeisan, a 98.6m high mountain, is an important mountain said to have been the reference point for city planning carried out by the Oshu Fujiwara clan. Muryokoin Temple, which was modeled after Byodoin Temple, was designed so that the setting sun would be seen from the garden and set behind the main hall of the temple on Mt. It is also known for the three Fujiwara generations’ tablets and the tombs of Minamoto no Yoshitsune’s wife and son at the foot of the mountain. The name is said to come from a legend that a pair of golden chickens, male and female, were buried at the top of the mountain.

Korogawadate is said to have been the former residence of Fujiwara Motonari, and is mentioned in the history book Azuma Kagami as the place where Yoshitsune committed suicide with his wife and child after being attacked by Yoritomo’s pursuers in 1189. The mansion no longer exists, but in 1683, Yoshitsune Hall and a wooden statue of Yoshitsune were erected where the mansion once stood. In 1689, Matsuo Basho visited Gikeido and left a famous poem.

“Summer grass and soldiers are the remains of a dream”

This is the place to go if you want to take pictures!

When talking about Minamoto no Yoshitsune, the name “Musashibo Benkei” always comes up. He was out of control from an early age, and even after he was forced to enter Mount Hiei, he continued to commit acts of violence. After a fateful encounter with Yoshitsune on the Gojo Bridge in Kyoto, it is said that he stayed close to Yoshitsune for the rest of his life and finally died standing in a hail of arrows in order to protect him.

Benkei Hall, located on the way up Tsukimizaka, enshrines Benkei, who lived for his lord, and the decorations seen here and there seem to be in memory of Benkei. Many people take pictures with his grave and the place where he “got stuck” in the background.

How to enjoy photography

After climbing the stairs to Gikeido, the Kitakami River and Mt. This is a spot with a spectacular view known only to those in the know, and on a clear day there are many people with cameras in their hands. It is said that Yoshitsune Hall is the place where Yoshitsune died, but in recent years, there are several candidates for the place where Yoshitsune died in a spectacular manner, including a theory that it was a “hospitality hall”. Perhaps Yoshitsune was also looking at the Kitakami River and Mt. Sokuinashi… I desperately want to point my camera at them.

I recommend heading for Chuson-ji if you are heading to Hiraizumi. The nearest station is JR Hiraizumi Station. Chuson-ji’s Tsukimizaka is a 30 minute 2km walk away and you can rent a car or, weather permitting, a bicycle. 1,000 yen for one day is more than enough to enjoy Hiraizumi. If you want to take your time and enjoy the sights, you can take a taxi for an hour’s ride for 5,000 yen.

Hiraizumi Rest House has become popular in recent years. Close to Chuson-ji, the first floor ‘Food Court Gate’ and souvenir shop are very popular with families, and from the second floor restaurant ‘Gen’ you can enjoy a view of Tsukimizaka. The “Benkei Chikaramochi Set” at the Food Court Gate and curry and rice bowls made from Iwate Minami Beef at the Rest House are popular. There is also a duty-free corner, so tourists from overseas can shop with peace of mind.