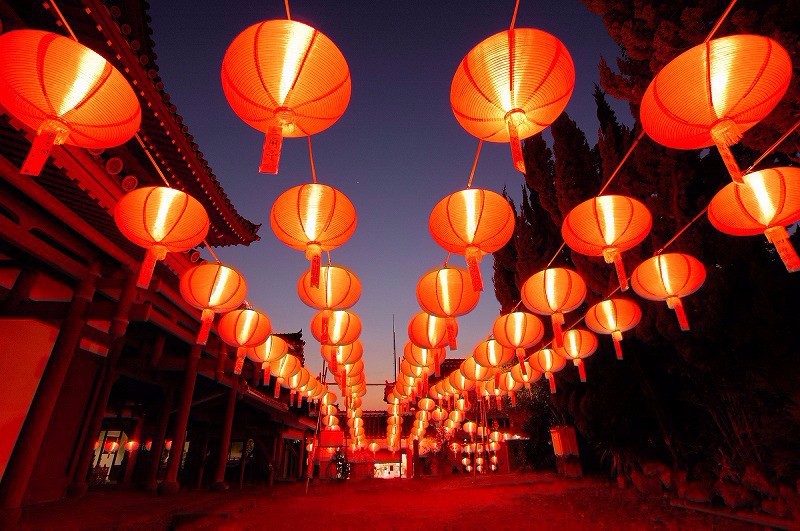 Nagasaki is the most exotic town in Japan. From ancient times it has been a transmitter of the culture of mainland China, and from the 16th century it has also developed through overseas trade with Portugal, the Netherlands and other countries. The influence of this can be seen in Nagasaki’s unique menus, which are arranged based on the cuisine of various countries, and in its architecture such as Western-style houses, Christian churches and the remains of Chinese residences. The Chinatown area, known as “Shinchi”, is the main venue for the Nagasaki Lantern Festival, a popular tourist attraction with an exotic atmosphere. The festival lasts for two weeks from January 1st to January 15th (Lantern Festival) of the lunar calendar. Based on the Chinese New Year celebration of hanging lanterns to light up the city after midnight so as not to miss the arrival of the spirits of the New Year, a total of about 15,000 lanterns are lit up all over the city, making it look as if spring has already arrived.

The origins of Shinchi Chinatown

In Japan during the period of national isolation, only Nagasaki was able to trade with Qing Dynasty China, so many merchants from Fujian Province came to Japan and formed a residential area on the hillside. As their society developed, they built many warehouses and other facilities in the “Shinchi” area, which was reclaimed from the sea, and eventually became a residential area, which was the beginning of Chinatown. Together with Yokohama and Kobe, it is known as one of the three major Chinatowns in Japan. The area has celebrated the Chinese New Year in its own way in honor of its hometown, but since 1994 the scale of the festival has been expanded in earnest and now attracts 800,000 spectators. Walking through the city, surrounded by the warm glow of the festival, you will feel as if you have jumped over time and place. 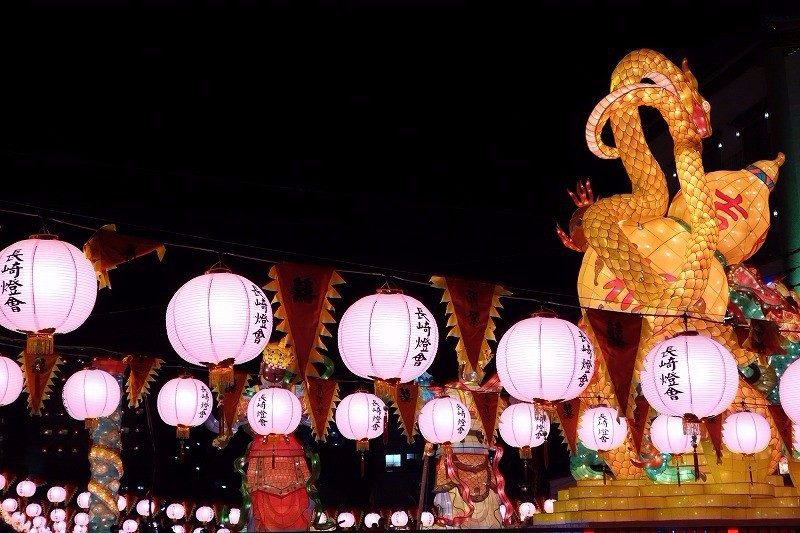 The main venue is “Nagasaki Shinchi Chinatown” and the adjacent “Minato Park”, and stage events and large objects will be exhibited at other venues such as “Tangin Yashiki Venue”, “Central Park Venue”, “Confucius Temple” and “Hamanmachi Venue” in the Sightseeing Street Arcade. Especially at the Central Park venue, the same events as those at the main venue will be held at different times, making it a great place for those who missed it! If you missed them, or if you want to see a lot of them, check out the schedule. If you missed it or want to see as much as you can, it is essential to check the schedule. Some places of interest, such as Dejima and the Confucius Temple, offer free admission during the festival, and some temples extend their opening hours to celebrate “Lanfest” with the whole city. A guide map of the event schedule is available on the website and at tourist information centers at stations and venues. It also includes major landmarks such as restrooms and accommodations. 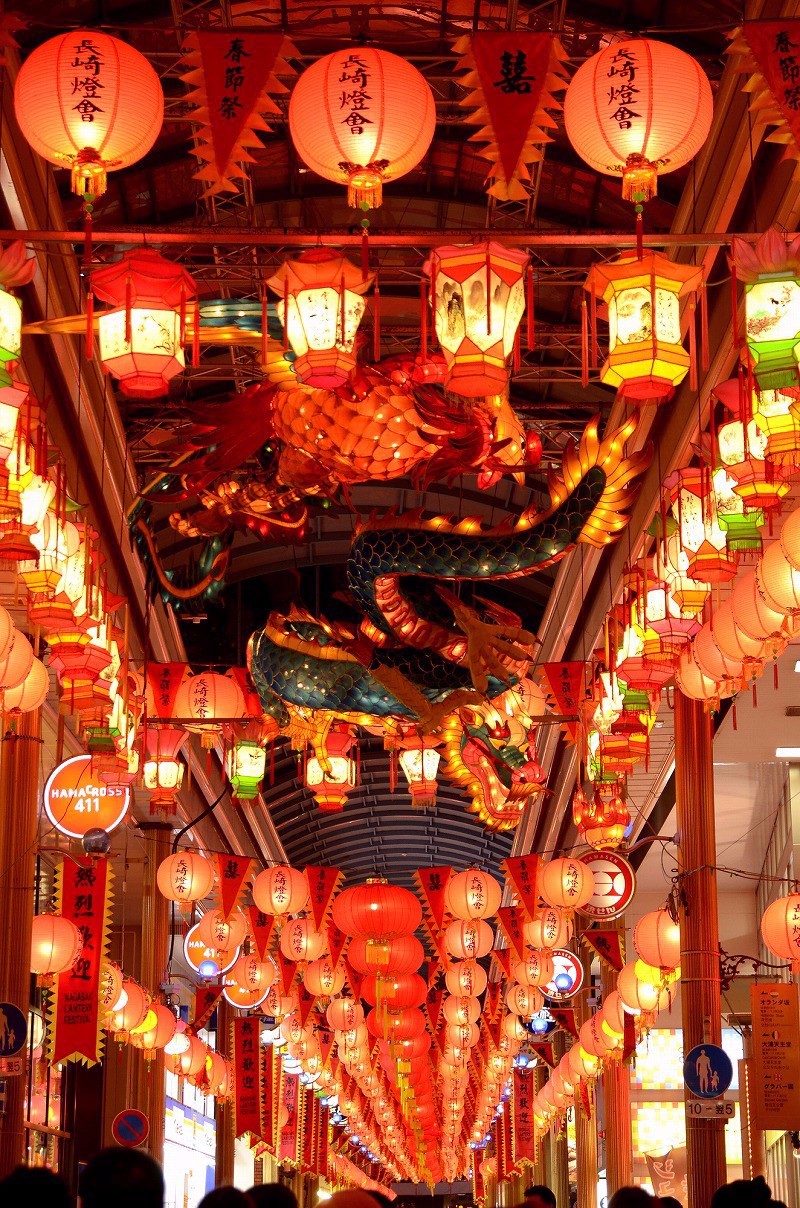 A feast of lights, every scene unforgettable

If your schedule permits, you should definitely be there for the “simultaneous lighting” at dusk on the first day. After the Spring Festival rites and acknowledgements, a countdown lights up the 12,000 lanterns, and it’s as if night has turned to day! It’s an emotional moment.

The charm of an exotic city

Be sure to go around the four gates that guard the east, west, north, south and west sides of the city, which are decorated with glittering auspicious motifs. Before moving on to the next site, it is worth seeing the peach-colored lanterns lined up from the bridge over the “Douza River”. The lights on the surface of the river create a fantastically beautiful sight. The red lanterns are also impressive at the nearby Tangjin Mansion Ruins. The alleyways, which are quieter than those in the downtown area, are like stepping back in time. The “Four Halls of Candlelight Prayer Tour” is held here, where visitors take turns to visit each of the four halls – Dojin Hall, Tianhou Hall, Guanyin Hall and Fujian Hall – and light a candle at each one. There is a legend that if you go around all of them, your wish will come true. This is the temple of Mazu, the god of navigation and travel, and you should pray for safety on your journey.

Every year, new ones are added to the city’s decorations, depicting the Chinese zodiac, Chinese gods and heroes. Their size, brightness and auspicious motifs make them popular photo spots. A stamp rally is also held to take visitors around each venue, so let’s stroll around the city while following each one. 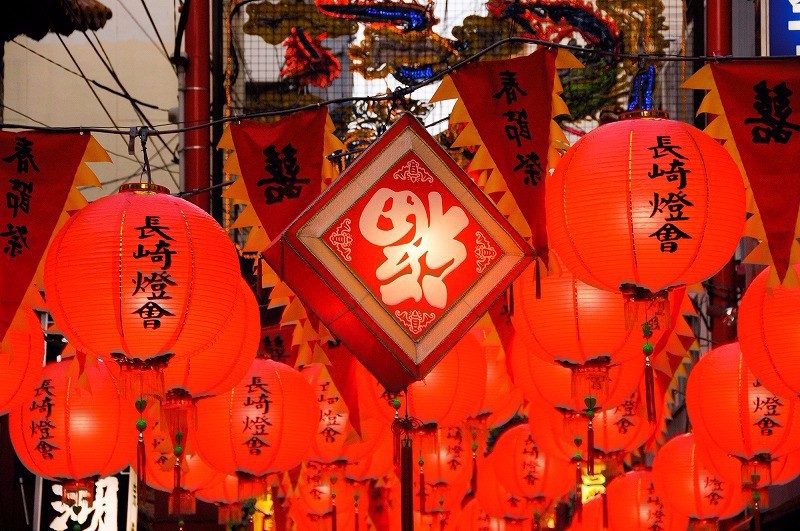 An essential part of the celebration, the Chinese Lion Dance is a must-see! At noon on the first day of the festival, although the lanterns have not yet been lit, the festival will depart from Shinchi Chinatown and make its way around the gates of shops and private homes in a “garden tour. On the first and last day of the festival, the “Mazu Procession,” a reenactment of the worship of the god of navigation by the crew of a Tang Dynasty boat dressed in period costumes, will take place from Kofuku Temple to the Confucius Temple and back, and from the Confucius Temple to Kofuku Temple and back. On weekends during the festival, the “Emperor’s Parade” features as many as 150 people dressed as emperors and empresses of the past, and the “Snake Dance,” which prays for a good harvest, makes its daily rounds of the city and various event stages.

Enjoy the culinary culture of the city

In Chinatown, traditional stalls selling small basket dumplings, gyoza dumplings and yaki-sai are popular. Other Nagasaki specialties such as hatoshi (prawn toast) and kakuni manju, a pancake filled with stewed pork cubes, are also perfect for a stroll through the city. If you are tired of walking and want to take a break or fill your stomach, Nagasaki’s famous chanpon, Sara Udon and Turkish rice are also available at the restaurants. For those who want to taste the authentic “Taste of New Year”, how about the “Lantern Festival Dango” which will be served at Chong Fook Temple in the evening of the last day of the festival (Lantern Festival)? It is said to be a dumpling of happiness, although you need to have enough time to line up early as it is limited to 500 people. There are also many remarkable national treasures in the temple grounds, so you should definitely give it a try.

Take the tram and get off at the Shogakuji-shita stop, then walk 3 minutes

The night view of Nagasaki is worth 10 million dollars

The night view of Nagasaki from Mt. If you have the time, take a short walk up the mountain. The ropeway to the observatory on the mountain across the river is a five-minute flight, and free shuttle buses run from JR Nagasaki Station and major hotels in the city to get to the observatory. Of course, the view in the daytime is also fantastic ♡

There is a connecting bus from Nagasaki Airport to JR Nagasaki Station (about 45 minutes to 1 hour) with a round-trip discount.

From JR Hakata to Nagasaki Station: Nagasaki Main Line, Limited Express Kamome (about 2 hours) From Fukuoka City: Express Bus “Kyushu-go” from Hakata Bus Terminal or Fukuoka Airport International Terminal to Nagasaki Prefectural Terminal (about 2 hours) (½ hour) From Nagasaki Station, take the “Community Bus Ran Ran” from the South Exit bus stop, which circles around the city. Get off at Shinchi Terminal and walk 8 minutes to Shinchi Chinatown. Nagasaki is also home to a streetcar system, a rarity in Japan. We recommend taking a ride on the tram to commemorate your visit to Nagasaki. From Nagasaki Station Terminal, board a tram bound for “Shogakuji-shita”, disembark at “Chikumachi Tram Stop” and an 8-minute walk will take you to “Shinchi Chinatown”. During the festival, traffic congestion is expected in Nagasaki City (especially around the venue) and restrictions will be enforced. Using public transportation or park-and-ride in the suburbs is recommended