Here are the best 15 things to do in Okayama, Japan. 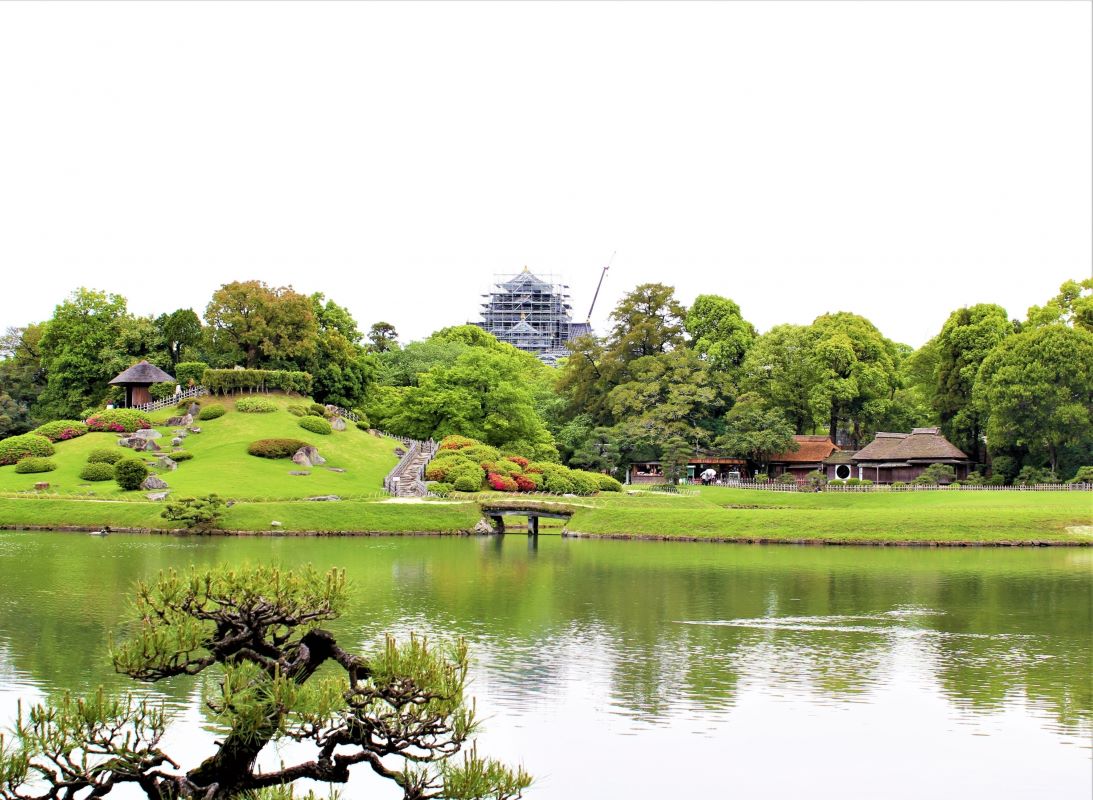 Okayama Korakuen Garden is a world heritage sight. In 1687, the construction began by the order of the feudal lord Ikeda Tsunamasa. It took 13 years to be completed and has retained its original appearance.

The garden was originally meant to be a place to entertain important guests, as well as a retreat for the Daimyo (feudal lord). The garden wasn’t open to the public until 1884. The garden is very large and has many sections including tea fields, groves, several ponds, and a crane aviary. This is one of the three most beautiful gardens in Japan and is definitely a must-see spot. 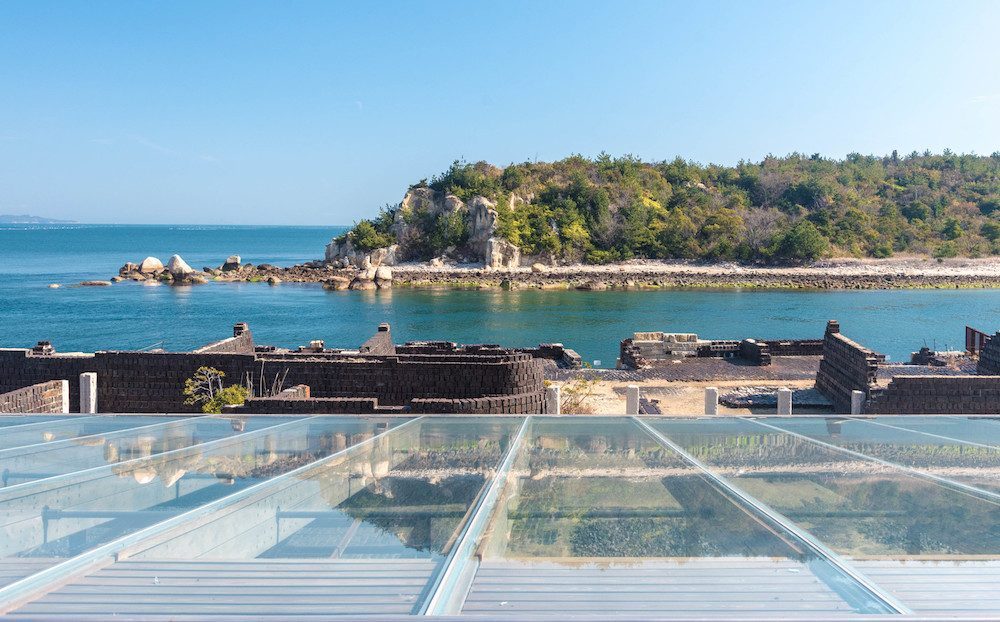 Inujima Island is named after a large rock that resembles a sitting dog. The island is a haven for modern art, featuring the Inujima Seirensho Art Museum. Every three years, the island hosts the famous Setouchi Triennale modern art festival.

The entire island can be explored on foot. Due to the small size of the island, there are limited options for dining, shopping, and lodging. The island does have a few restaurants near the ferry. There is also a campground near the beach area, which is the best housing option on the island. 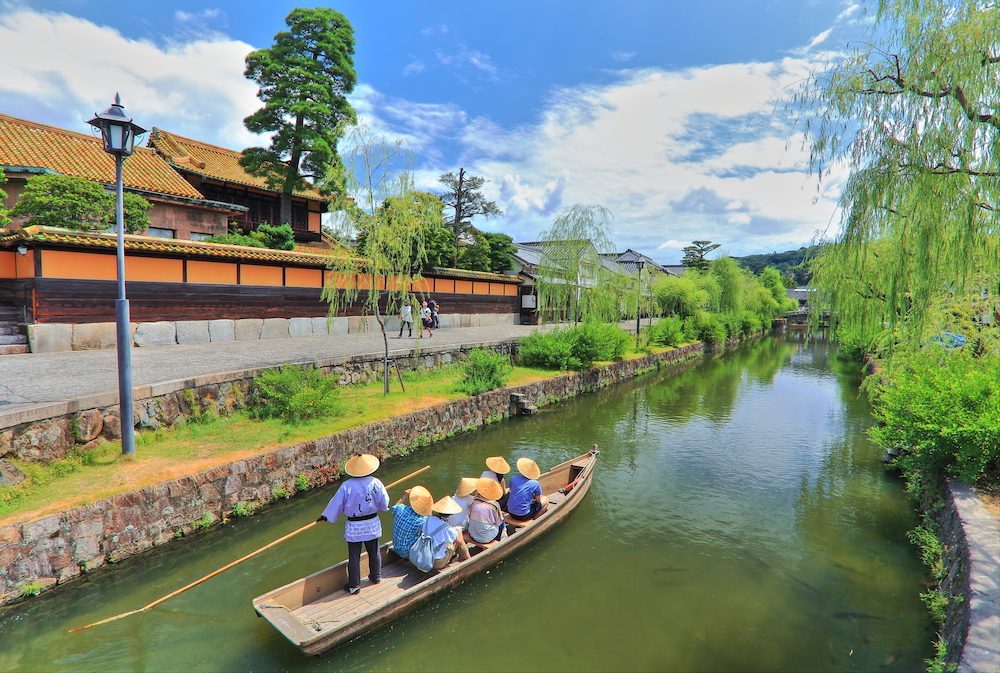 This historical district has been carefully preserved since the Edo period. The canal district had great significance during the Edo period in the rice trade, in which the city was used to store, trade, and distribute rice to other cities such as Osaka and Edo (Tokyo).

Many of the storehouses have been converted into restaurants and cafes. The famous canals were built to help navigate the storehouses and the port. This district has been preserved so you can tour and see what life was like in the Edo period.

You can shop for souvenirs and have coffee and eat at any of the many restaurants and cafes. There are also many museums in the area to explore. 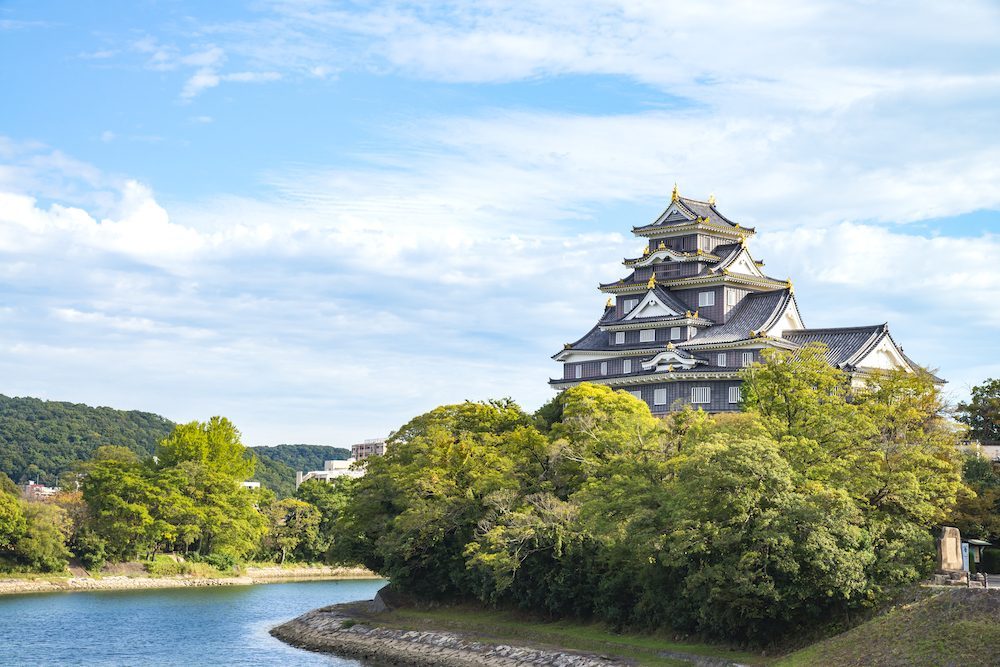 Okayama Castle is also known as “crow castle” for its black exterior. Although the original castle was destroyed in the last year of World War II, the castle was rebuilt in 1966 to its original appearance.

It is located on the Asahi river, and the castle was used as a moat. The inside of the castle is now a museum where you can see the history of the castle. You can also view the foundations of the old castle and the only original building that survived Tsukimi Yagura. This historical sight is a must-see on your trip to Okayama. 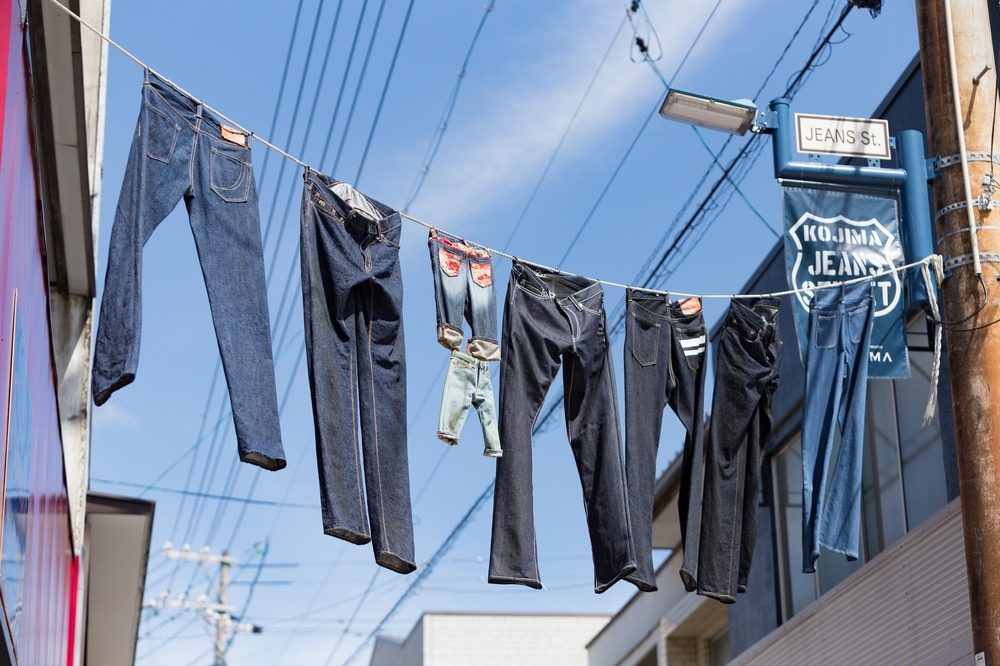 Kojima Jeans Street is the birthplace of jeans in Japan. You can visit the town’s many shops and cafes and see the many different jeans hanging on the street.

There are many shops specializing in jeans where you can buy antique, modern, and designer jeans from name brands. You can also take the Jeans Bus which is decorated interior and exterior completely in jeans. You can take commemorative photos on the bus and in the streets of Kojima.

The Kibi kingdom was a great kingdom of the fourth century in ancient Japan. The inner sanctuary was reconstructed in 1425 by the order of the emperor. You can experience history at this beautiful historic site and learn more about the ancient history of Japan. 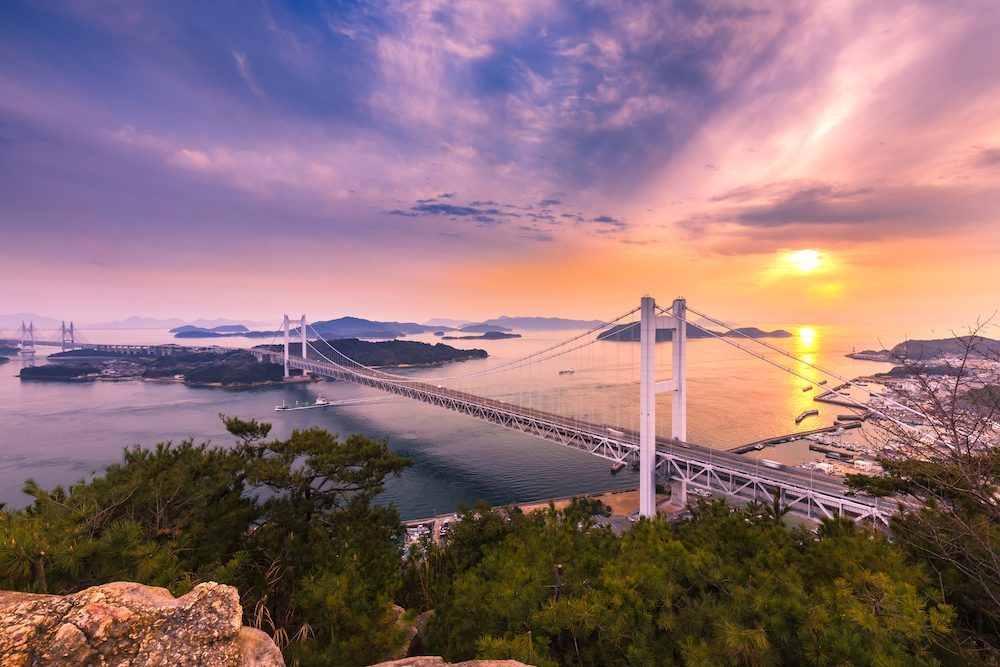 Mount Washuzan is located in Setonaikai National Park, the Japanese “first national park”. The viewing spot gives you an amazing view of the national park and surrounding islands.

You can also have a perfect beautiful view of the Great Seto Bridge, one of the longest two-tier bridges in the world. The view is most beautiful during sunset and sunrise. There is a rest house at the observatory, where you can relax and watch the beautiful sunset in the land of the rising sun. 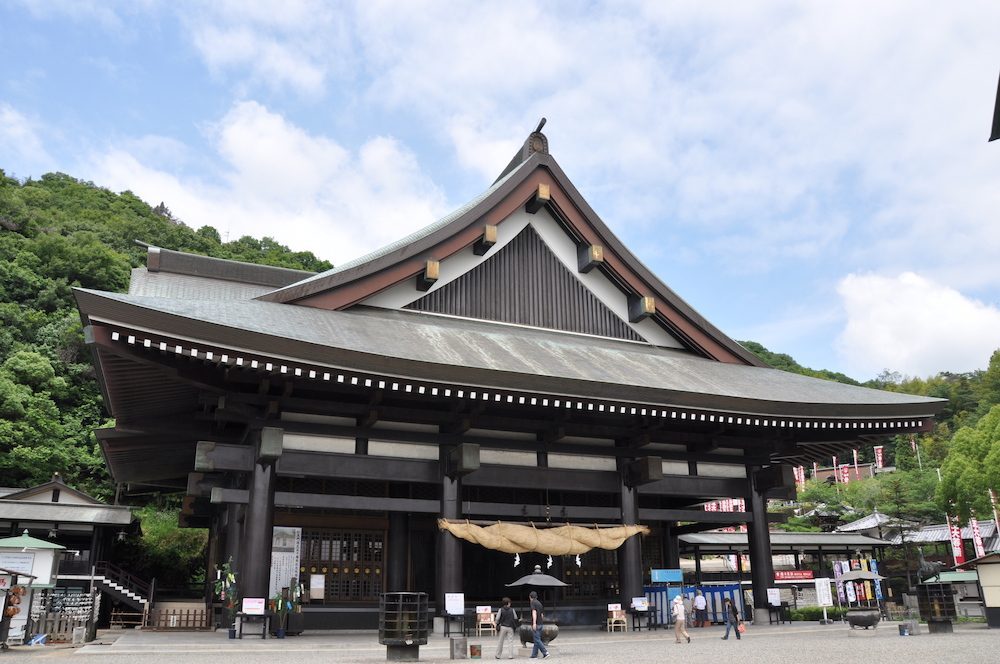 The temple gives great views of the beautiful, green countryside and mountains. The temple is still used by Buddhists today to protect the Lotus Sutra. Praying at the temple is said to give good business and a fruitful harvest. The temple is a great stop on your trip to Okayama.

This castle has gotten more attention in recent years due to its uncanny likeness to Laputa from Miyazaki Hayao’s “Castle In The Sky”. The scenery is stunning as you are completely surrounded by clouds as if you are on a floating island.

The castle is located at the highest altitude of all castles in Japan, at 430 meters. In the fall the foliage changes colors to oranges and reds, giving the castle an even more majestic appearance than the rest of the year. This an amazing place to visit for Ghibli fans as well as those who love hiking, nature, and history. 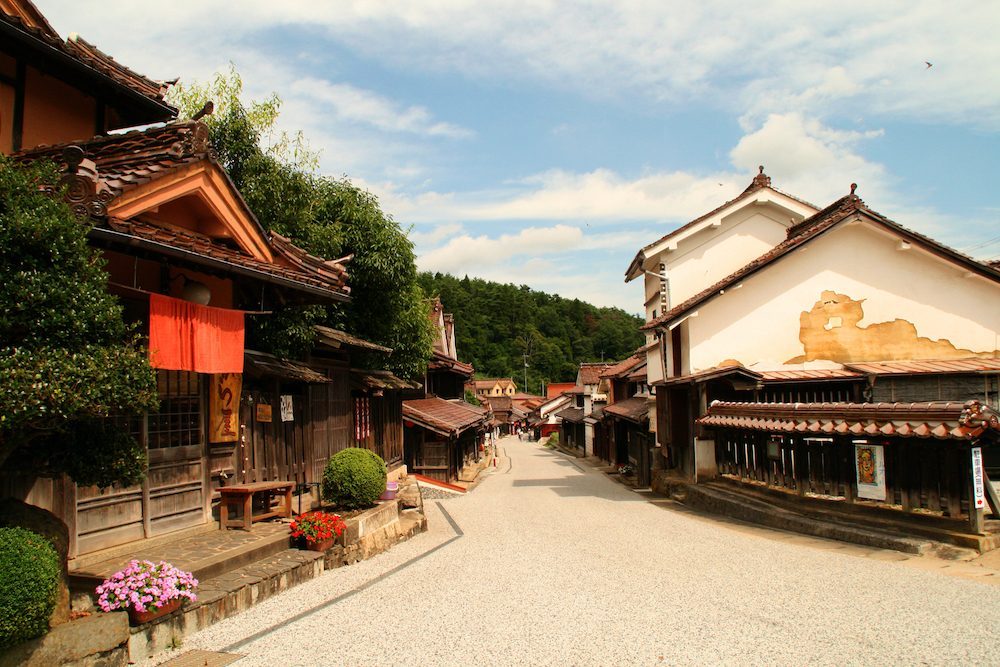 The town became famous due to its once-booming copper mining business. Most of the town was built with copper materials, and over the course of time, the copper has oxidized to give the beautiful red and orange color the buildings have today.

Beautiful buildings have become important to the Preservation districts for the protection and preservation of traditional buildings. This is a great place to find one-of-a-kind souvenirs such as the Bergara-dyed stoles, as well as many vintage and copper products. There are also many traditional Japanese restaurants to try. 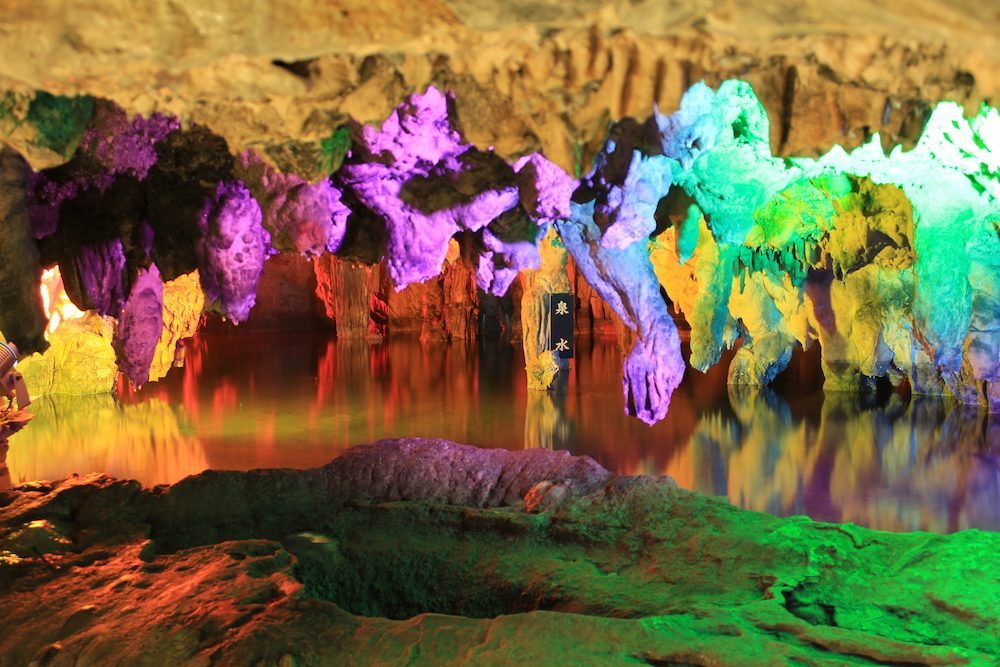 This cave is one of the largest caves in western Japan, at 1.2 kilometers long and 90 meters tall! You can see the earth’s history through the beautiful rock formations and amazing “Jellyfish Rocks”. The cave also has several waterfalls, the foliage of the Ikura Gorge, and the Takahashi River.

The cave remains the same temperature year-round at about 15 celsius, which is quite warmer than most other caves found in Japan. There are many other limestone caves in Okayama as well to explore such as Maki-do cave. The caves are illuminated year-round by beautiful multi-colored lights. 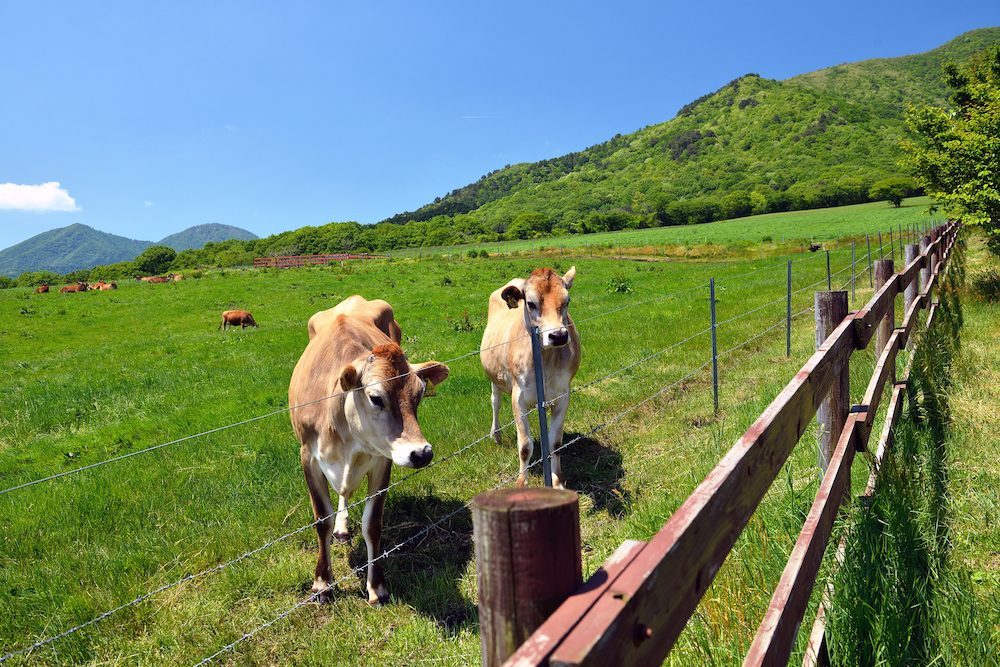 This national park resort is a beautiful area you can explore. The park has a bathhouse where you can relax after a long day of travel. The park has bikes to rent for its beautiful cycling trails.

The park also has hiking trails, camping grounds, and restaurants. If you visit, it is recommended you try the famous local dish, Hiruzen Yakisoba. You can also try their ice cream and buy fresh dairy products available from their Jersey cows.

You can also spend the night at the Kyukamura Hiruzen Kogen Hotel. 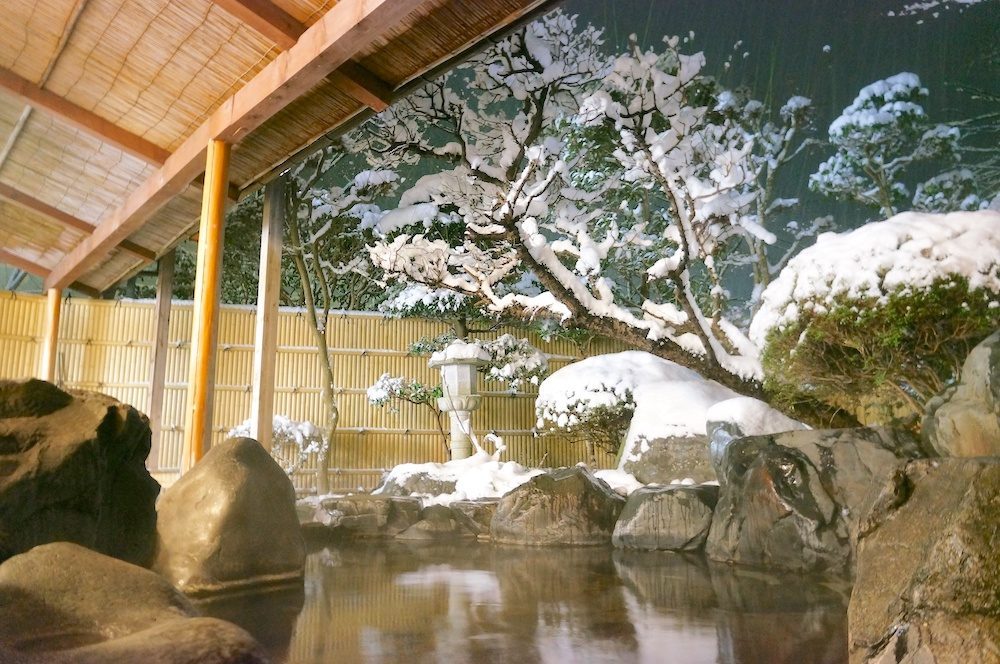 This historical onsen in Okayama offers some of the best hot spring waters Japan has to offer. The onsen offers high-quality hypotonic alkali mineral waters from 16 fountainheads.

The waters are heated naturally from the earth from the Hokidaisen and the Hiruzen volcanos. The waters are good for treating chronic skin illness, diabetes, and much more. The onsen has a long history starting by serving workers from a high iron manufacturer a nearby hundred of years ago.

The workers had to travel long distances over the mountains and would stop at this onsen. The onsen was also the inspiration behind the Iron town in Miyazaki Hayao’s “Princess Mononoke”.

The onsen dates back to the history of “Ofuku-no-kata”, a beautiful woman and concubine of Hideyoshi Toyotomi, a major vassal in ancient times. He built the onsen for her when she fell ill to treat her illness.

The baths are mixed-gender and you must wear a special bathing robe. There are several ryokan hotels to choose from all at this facility. 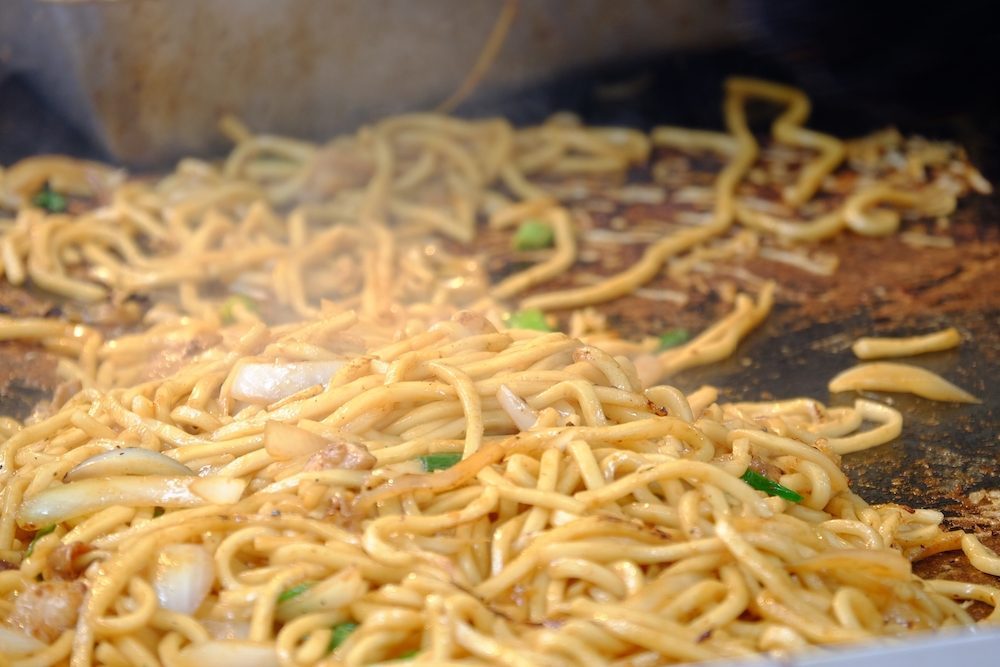 Tsuyama Udon and Hiruzen Yakisoba are local specialties of Tsuyama in Okayama. They are a must-try dish for anyone who is visiting. The region is famous for its dairy farming, and these dishes do not disappoint.

One famous restaurant serving these dishes is Mie, which has received national attention and has even been shown on Japanese television and in magazines. The Tsuyama udon won second place at the B-1 grand Prix food competition in Himeji in 2011.

You can buy the sauce that goes with the dishes at Mie restaurant for only 400 yen. 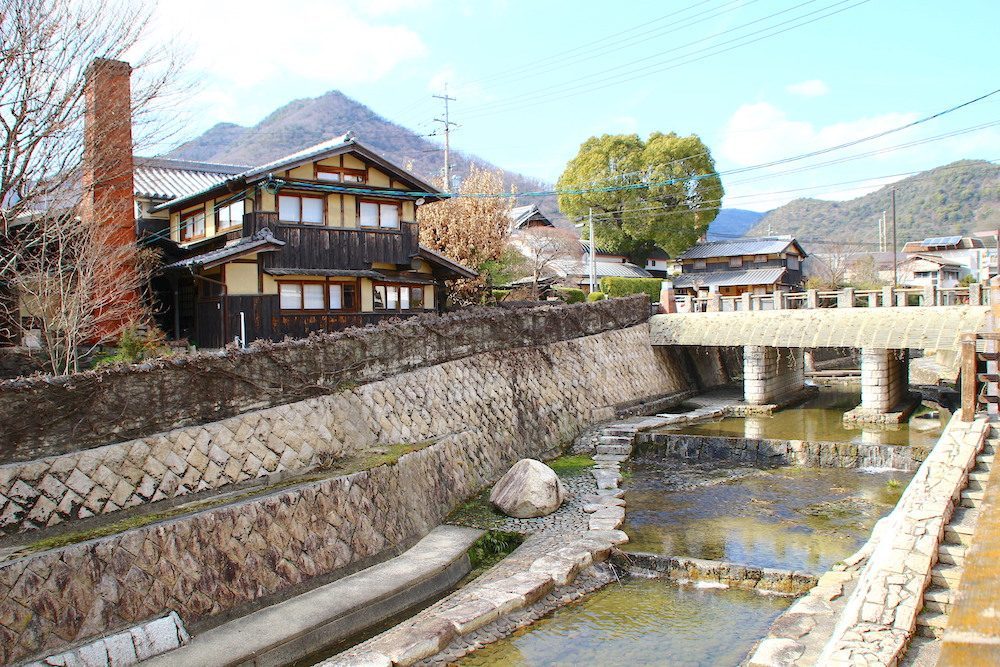 Imbe is the birthplace of Bizen pottery, one of the oldest forms of Japanese pottery. The village dates back over 1,000 years ago and features over 100 potteries and galleries. The village is famous for its red brick buildings and pottery tile roofs.

Visitors can view the over 250 master pottery works the village has to offer and even participate and learn how to make pottery yourself.

The pottery work features modern pottery all the way back to ancient times. You can bring home a unique souvenir from one of the many shops, including at Imbe Station, or you can make your own souvenir through one of the many workshops offered throughout the village.