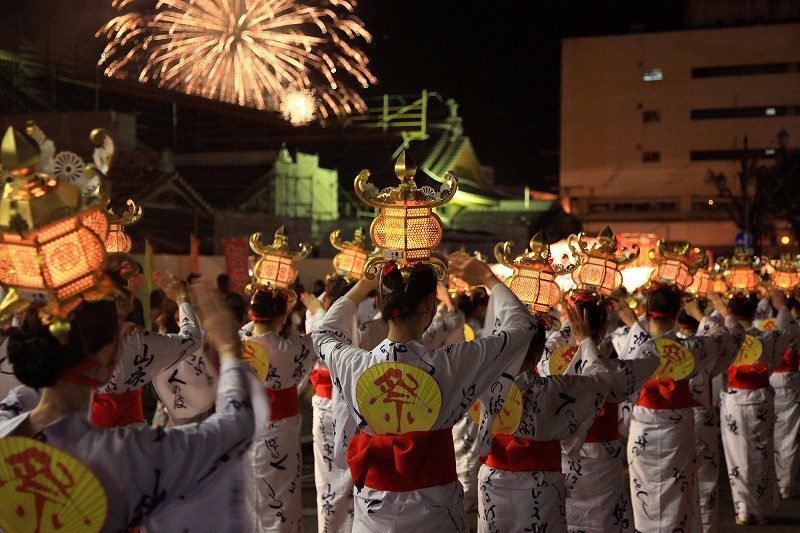 Women in matching peach-colored yukata and red sashes dance gracefully in a multi-layered circle. On their heads are delicate lanterns shining in gold. The sight of them dancing to the sound of “Yoheho, yoheho” is an elegant scene that seems out of this world. This is the highlight of the “Sen-nin Odori (dance of 1,000 people),” which is held every year on August 15 and 16 in Yamaga City, located in the northern part of Kumamoto Prefecture. Once seen, it is an unforgettable and ethereal space.

Contents hide
1 The origin is an ancient legend
2 What does Yoheho-bushi mean?
3 Yamaga Lantern Festival Highlights
4 Skills honed through competition
5 Look closely at the lanterns
6 Learn more
7 Lantern Festival Schedule
8 Odori and the main festival day
9 The highlight of the Thousand People Dance
10 Dedication of lanterns
11 Yamaga Lantern Festival Access
12 Seeing is not enough
13 I want to make one
14 Let’s enjoy the retro buildings
15 Train access

The origin is an ancient legend

This was the time of the Kojiki. Legend has it that the people of Yamaga guided Emperor Keiko (father of Yamatotakeru), who was lost in a deep fog. To commemorate this event, torches were enshrined at Omiya Shrine every year, but in the Muromachi period (1336-1573), they were changed to lanterns, a local specialty, and offered to the people, which is said to be the beginning of the Yamaga Lantern Festival.

Originally, it was a shamisen song that was sung in a relaxed manner by the people. The poet Amejo Noguchi, a poet of the Meiji Era, rearranged the lyrics and the song took on its present form. Yo-he-ho” is an invitation to “get drunk (and you too),” and “nushi” is the bone of a mountain lion. It begins, “Nushi wa yamaga no boneless toro…” Part of the lyrics can be seen written on the dancer’s yukata. You too should listen to this song and be intoxicated by the world of dance. 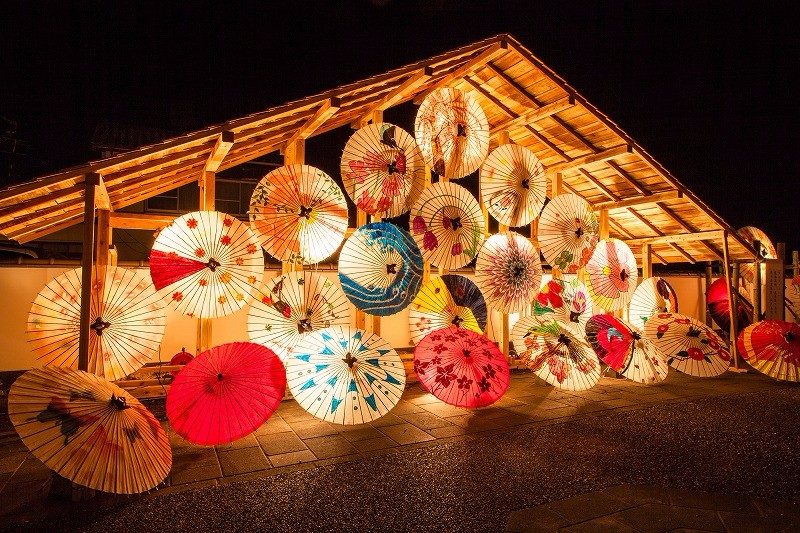 The gold lanterns worn on the heads of the “lantern girls” who dance the lantern dance are actually crafts made of paper. It is so delicately cut out and assembled that it looks like real goldsmith’s work, but it weighs less than 200 grams. There are also many other types of crafts such as “miya-zukuri”, “zashiki-zukuri” and other architectural forms, as well as “dolls” and “birdcages”. As they are also called “boneless lanterns,” everything from the pillar and base to even a single thatched roof is finished by assembling or rounding washi paper into a hollow shape. Since these lanterns are also for viewing purposes, the scale has been elaborately scaled to make them look more realistic, making them more than miniature works of art. There are currently only six lantern makers in Japan who can make these lanterns. Since the Muromachi period (1333-1573), the technique has been refined in the back rooms of wealthy merchant families who were patrons of the town as a secret tradition passed down from master to apprentice, and has developed into a unique and valuable traditional craft.

Look closely at the lanterns

In the “Lantern Hall” of the Omiya Shrine, dedicated lanterns are displayed and stored for one year. In the following year, new ones will be delivered and replaced, and the ones before that will be given to those who wish to use them. On the day of the festival, visitors can draw fortunes on the temple grounds. You may even get a “winning lottery ticket”! Even if it doesn’t turn out to be a lucky draw, you can still get longevity chopsticks. Let’s try our luck!

You can see masterpieces of lantern work throughout the year at the Yamaga Lantern Folk Art Museum in the city. The building itself has a history as a bank built in 1925 and is also worth a visit. It is definitely worth a visit. 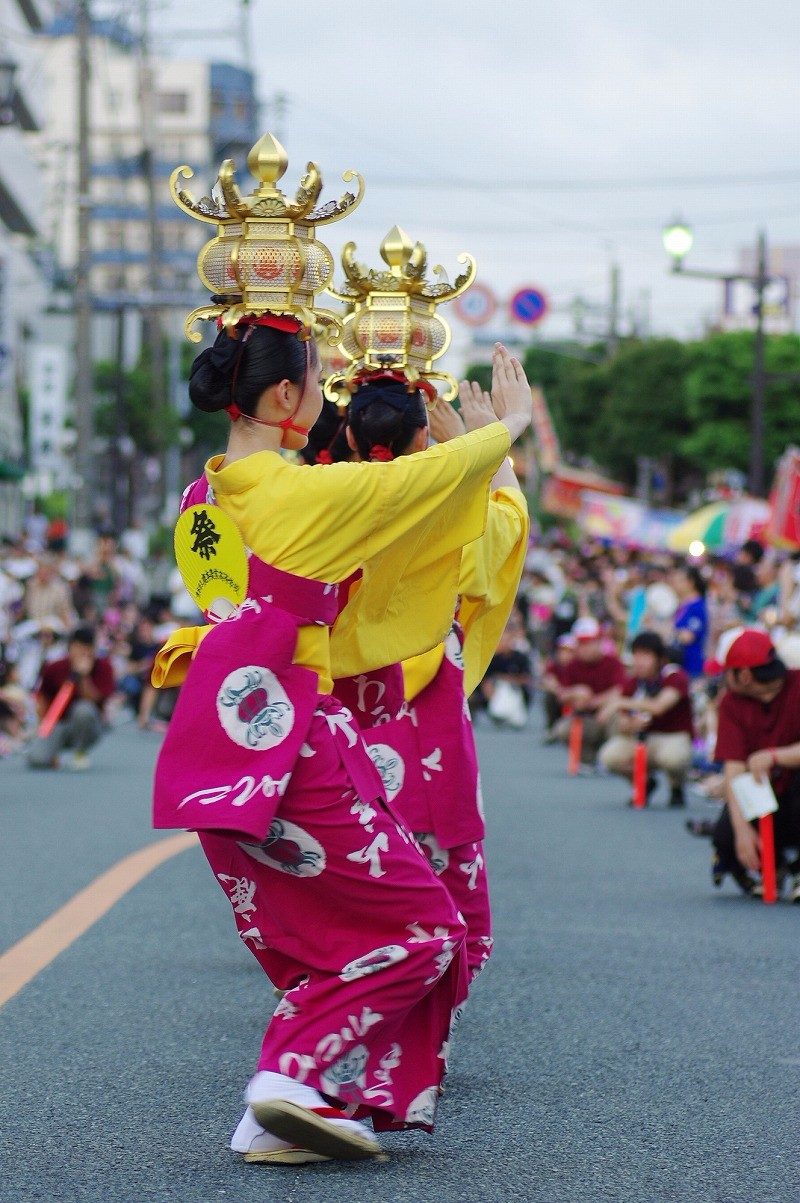 Odori and the main festival day

First, on the afternoon of the first day, the 15th, new “lanterns” made this year will be set up in various places in the town. The most common are the “miya-zukuri lanterns” that resemble shrines. The elaborateness of the lanterns, made even down to the interior of the rooms, is a sight to behold. As the sun sets, the lantern dance dedication at Omiya Shrine begins. After that, there are various events and stalls to enjoy such as the fireworks display on the banks of the Kikuchi River, the “Nagashi Lantern Dance” and the “Lantern Lottery Lottery” at the festival square.

The 16th is the main day of the festival. In the morning, the regular festival will be held at Omiya Shrine. And at night, the festival square will be crowded with different events, starting with Fure Taiko, followed by the Girl’s Lantern Dance, a presentation by the Preservation Society, and Yamaga Taiko drums. Then, the “welcoming ceremony of Emperor Keiko” starts from around 8:15 p.m. along the Kikuchi River and comes to the “Yamaga Elementary School Ground” where the Lantern Dance takes place, reaching the climax of the festival.

The highlight of the Thousand People Dance

The biggest highlight of the festival is the “Sen-nin Odori” dance, which everyone wants to see at least once. This is held only on the night of the second day, and is divided into two parts. The fantastic first part with the golden lanterns glowing in the twilight, and the second part with the flickering lights leaking from the openwork patterns in the darkness, it is hard to decide which one to see. Tours are free, but you can reserve in advance for “special viewing seats” where you can watch the festival in a calm and relaxing atmosphere. We recommend the view from a slightly elevated position, which makes it easy to see the circle around the turret. However, the Japanese paper lanterns are vulnerable to rain…in case of rain, the festival will be postponed or cancelled.

After the dance, the Emperor’s torchlight procession goes to the Omiya Shrine right next door. Towards midnight, with the call of “Hai, Touro”, the lanterns that had been displayed around the town are brought in for the “Agari-Touro” ceremony. There, the lanterns are purified as official votive offerings, and then they are rededicated and displayed, to be preserved for a year to come. The godliness of the lanterns is something that you should definitely keep in your mind’s eye. 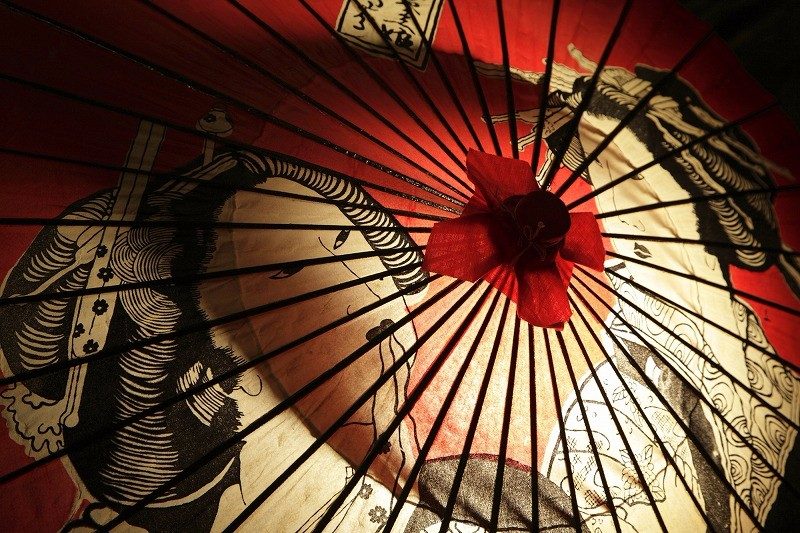 Seeing is not enough

If you want to dance with the lanterns, touch the lanterns, or experience anything else, here’s a way to enjoy the festival! Although there are openings for the general public to participate in the “Lantern Dance” (limited to 200 people by advance application and lottery), travelers have to attend three practice sessions beforehand, which can be a bit intimidating for some. However, you can try on the costumes at the “Toro Musume Narikiri Experience”. It takes about 15 minutes (the fee is 500 yen), although reservations are made for one person at a time. Please inquire at the Yamaga Monzen Art Museum, a gallery established by a former lantern maker. There is a cafe here and you can also get cute “cocoon dolls” as souvenirs.

I want to make one

Because of the delicacy of real lantern work, it is not possible to touch it. But how about making a “miniature lantern” and giving it as a souvenir? The parts are already assembled, and anyone can easily do it by gluing and joining the details. It takes about an hour and a half (3,000 yen). The size is about the same as a palm, and the workmanship is as exquisite as the real thing.

First, let’s visit Sakurayu, the original hot spring of Yamaga Onsen. The building, which was loved as a citizens’ hot spring, has been restored to its original appearance since the Meiji era. The architectural style of the Edo period has been reproduced, including the north and south entrances with Chinese gables, the unique cross-shaped roof, and the “dragon bath” used by distinguished guests. You will feel the era, even more, when you use it as a drop-in bath.

The Yachiyoza Theater in the center of the city was built in 1908 and is a nationally designated important cultural property. The stage is one of the few in Japan that still retains the appearance of an Edo period playhouse, including the seats and planks, the man-powered stage, the hanamichi (flower path), and the auction called suppon. The theater is open for tours when not in use.

Admission fee: 420 yen *Tickets are also available for use with the Yamaga Lantern Folk Art Museum

Take the Sanko Bus bound for Yamagaonsen from Kumamoto Station on JR Kyushu’s Kagoshima Main Line. Get off at Yamaga Bus Center.

Or take the Sanko Bus bound for Yamaga Onsen from Shin-Tamana Station on the Kyushu Shinkansen Line (approx. 50 mins).

If you rent a car, it is about 2 km (5 minutes) from the Kikusui IC of the Oita Expressway. This is the most convenient way to travel around Kyushu, but the surrounding roads will be very crowded on the day of the tour. Please check the website for information on traffic restrictions and use the temporary parking lots in the area. Shuttle buses will be running from the parking lot to the center of the city.